Based on the sensational trial against Memming gynaecologist Dr. Theissen, Norbert Kückelmann directed a television film in 1992 in which he strictly adhered to the legal facts of the case. Dr. Heß, as he is called in the film, was accused of performing abortions on women who were unable to provide the legally required medical consultation certificate. Heß is said to have relied solely on his own competence to judge when considering these women’s social or psychological difficulties. He is arrested because of this fact and many of the women on whom he carried out abortions are sentenced.
Kückelmann’s film does not so much put forward arguments for or against abortion. Rather, it conveys a picture of how - being confronted with a sensationalist public - the most intimate feelings are mercilessly exposed in this matter. The sympathy in this film is clearly on the side of those women who have to give evidence before an inhumane male-dominated court. 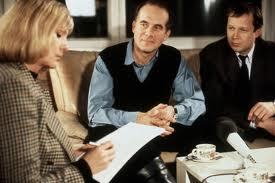